A four-time Stanley Cup champion will be patrolling behind the Portage College Voyageurs' bench this season. Kevin McClelland, who played centre during the dynasty years of the Edmonton Oilers, will serve as Associate Coach of the Portage College Men's Hockey team in 2019-2020. 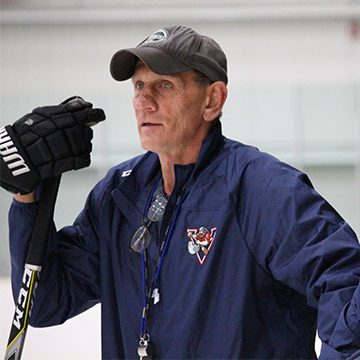 In addition to his playing career, McClelland also has 19 years coaching experience in the Western Hockey League, American Hockey League and most recently the East Coast Hockey League where he took the Wichita Thunder to the playoffs seven years in a row.

"This is huge for us," says Nate Bedford, Head Coach and Director, Athletics & Recreation at Portage College. "We're certainly happy to have someone with his coaching resume at our college and in our community. Having a Stanley Cup champion who is willing to work with youth hockey is an incredible benefit to Lac La Biche County."

As Associate Coach, McClelland will help teach fundamental skills and team development - not only for the Voyageurs, but also within the minor hockey community. "I'm excited about coming to Lac La Biche and Portage College," he said. "Nate talks highly of the program and the community. I look forward to being a part of both."

The puck drops on the Portage College Voyageurs regular season Friday, October 11th against the Concordia Thunder in Edmonton, Alberta. The two teams will clash again the next night in Lac La Biche, Alberta at the Bold Center at 7 p.m.