In 1968, Alberta NewStart was established in Lac La Biche as part of the federal government's initiative to research basic adult education. NewStart offered instruction in areas as diverse as academic upgrading, trapping, wild fur management, and oilfield management. However, in the winter of 1970 the government decided to close the facility and cease the research. A group of Indigenous students faced with the pending closure of their school decided to challenge the government by staging a twenty-six day sit-in. The group was successful, and the government awarded a grant to continue the NewStart program. The school took on a new name "Pe-Ta-Pun" meaning "New Dawn."

In 1973, the federal government once again stopped funding the program. This time, however, the Alberta government took over the program, reopening it as the province's fifth Alberta Vocational Centre (AVC). From 1973 to 1980 programs and services expanded to include community based programs. In 1980, the Minister of Advanced Education and Manpower announced plans to replace AVC's temporary facilities with a new campus, which was opened in 1985. A Board of Governors was established for the College in 1998 and the following year the Minister of Advanced Education and Career Development approved a change of name to "Portage College."

From these humble beginnings the College has steadily grown to the successful institution it is today. Portage College offers over forty certificate and diploma programs and has campuses or learning locations in the communities of: Boyle, Cold Lake, Frog Lake, Lac La Biche, Saddle Lake, St. Paul and Whitefish Lake.

This book documents our first 50 years of history and features stories from many students and staff members.

“As an employee for 30 of those years, it was a trip down memory lane that I will cherish forever,” said Nancy Broadbent, President and CEO Portage College.

This 135-page hardcover book is available at the bookstore. 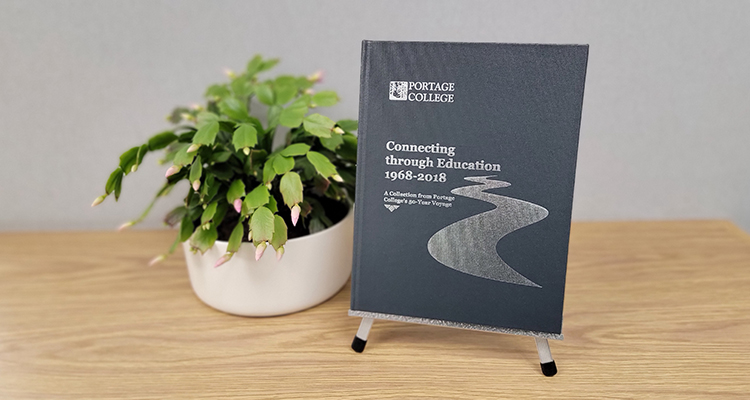 This video is dedicated to the visionary efforts of the founders, and the legacy they have left to the residents of northeast Alberta.

We acknowledge that Portage College’s service region is on the traditional lands of First Nation Peoples, the owners of Treaty 6, 8 and 10, which are also homelands to the Métis people. We honour the history and culture of all people who first lived and gathered in these lands.