This year’s ACAC Golf season had a silver lining with a bronze tinge – and plenty more for the Portage College Voyageurs.

The men’s and women’s squads wrapped up the 2021 ACAC Golf Championship in Edmonton in early October by establishing an historic standard of excellence. The women’s squad captured Portage’s first-ever ACAC silver medal while the men’s team won the College’s first-ever bronze. The Voyageurs also won the College’s first-ever ACAC Bronze Team Medal in mixed golf. Delaney Ross, playing in her first golf season, topped everything off by finishing third in the individual standings, and being named ACAC Rookie of the Year and an All Conference Athlete. Delaney is the first Portage athlete to be named Rookie of the Year since R.T. Rice took home the award in the 2015/2016 year in Men’s Hockey.

This year was an amazing experience for all of those involved.  We went out to compete and did just that,” said Lorin Tkachuk, Head Coach of the Voyageurs Golf team. “I couldn’t be happier with the level of professionalism and dedication that the athletes demonstrated, over the weeks of training and competition. Next year we will come back even stronger and continue to break the records set this year.” 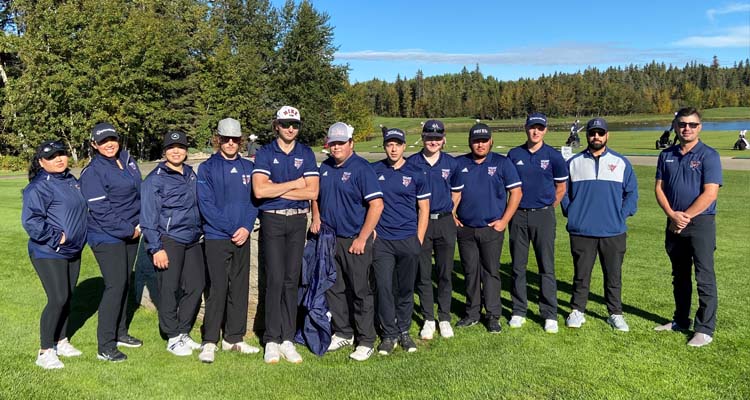 Breaking records was the theme for this season’s golf teams with individual awards and first wins for the women’s and men’s teams. The women’s golf team – Delaney Ross, Kelly Orr and Alura Pachapis – all finished in the top 10.

The men’s golf team followed up the women’s records with their own first time wins for Portage and claimed the bronze medal. The six male golfers – Isaac Barr, Matt Krawiec, Brody Dale, Brayden Dale, Jake Mosich and Mason Stabbler – all finished in the top 25. Barr recorded the highest Portage ranking in men’s golf as an individual, finishing 13th overall.

“I couldn’t be more proud of our golf team, many of our golfers had not played in competitive tournaments prior to the ACAC season,” said Stephen Anthony, Manager of Recreation and Athletics at Portage College and goes on to explain that “We are very excited for the future of our golf program, I think we have a great foundation to work from including strong leadership of our coaching staff and many of our golfers retuning next season.”


We acknowledge that Portage College’s service region is on the traditional lands of First Nation Peoples, the owners of Treaty 6, 8 and 10, which are also homelands to the Métis people. We honour the history and culture of all people who first lived and gathered in these lands.